The Image is trying to make a point that governance includes PCI compliance and can be a basis of making proper IT decisions with the future in mind. Where the focus of compliance and regulations efforts are on specific actions and data, governance can be all encompassing and most important create an environment where proper decisions are made with the right people in the room. Nothing is missed, whereas the compliance efforts are only doing what they have to.

Our latest blogpost at https://oversitesentry.com/compliance-vs-framework/ (a bit more information)

Is it important to focus on Security? How much should we pay attention to Computer Security? Can we relegate Computer Security or as some coin the phrase 'Cybersecurity' to an afterthought? Or at least a small line item in the plan for 2019!

So 'IF' there is a ransomware attack on the most important data that we use, and we cannot recover the data(for whatever reason) is that important enough to pay more attention?

As the image above notes in six months we could be out of business if we did not prepare properly setting up backups for our data. Sometimes ransomware just destroys data and it cannot be recovered.

Contact us to get someone to review your backup plans and more to make sure that your business will be viable even after a ransomware attack. 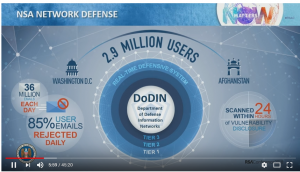 NSA insights video(7/18/18) gives an overview of what is happening in their Cybersecurity Threat Operations Center.

The presentation explained when the Equifax hack happened due to a strut vulnerability the nation state actors were attacking US government networks looking for this vulnerability within 24 hours of release.

Interesting to note Dave Hogue technical director, National Security Agency(NSA) said that there is still a faulty thinking, as 1/3 of respondents  to a survey think that there is a better chance of getting struck by lightning than getting cyberattacked. This thinking is clearly wrong, but the perception is there.

I agree with this assessment - there is clearly a faulty thinking in many places.

So now we are in July 2018 and the 3rd quarter has started in earnest, have you completed  your compliance reports for 1st and 2Q?

PCI compliance is just a bunch of check marks right?

Just say your network is secure, the payment transactions are all encrypted, all the employees know what to do in all situations, etc. etc.

Did you perform Risk Analysis as the PCI compliance documents require at PCI Security standards? 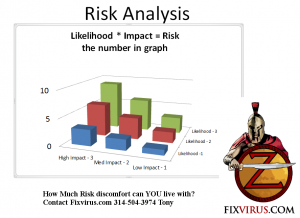 Unfortunately if you ever do get breached and you do not have all the paperwork, the fines will make paying an auditor for years chump change.

Contact us to audit or create Compliance security policies.

With the new Facebook data leak scandal in the spotlight - are you concerned over how your company deals with customer data?

Our latest blogpost at Oversitesentry: http://oversitesentry.com/protect-privacy-of-client-data-using-new-ways/ discusses what could happen as the new EU privacy regulations are going to be enforced.

Make no mistake the regulations in America will also change (towards Cyber privacy).  As self-regulation has not worked for the industry.

Good news on that front  -  At Fixvirus.com we have a spring cleaning special April - through May   we will offer our Alpha scan at half price.

If you are in need to just discuss some Cybersecurity first - contact us and the half off - still stands.  Half off consulting time and material up to 10 hours.

There are many projects we are involved in, but we have a strict policy of not discussing our projects with the world. For the right project, we are willing to make monetary concessions so that we can use your project as an example on our marketing efforts.   We would never divulge details just general items such as: 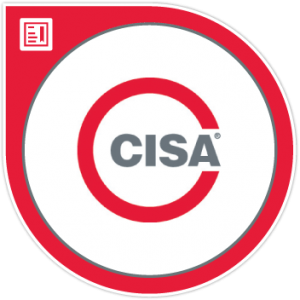 Here is a video I created discussing the patch cycle with the latest (in the news) Intel processor bug. https://youtu.be/MziDbc-pWa8

The bug found- patch installed process is not so easy, from beginning to end, and you also need to have a patch process available. 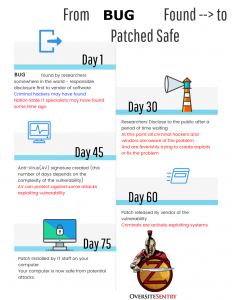 Do you need a fresh perspective?

Is your IT staff overworked? Do they get projects completed on time and under budget?

What is the true value of knowing your Cybersecurity risks and threats?

Does your IT staff have the experience to give you a proper report of your Cybersecurity compliance reports?

CISA certified means Certified Information Systems Auditor. Which means you will get a proper report after a thorough review.

So there is a large amount of entities not doing what they should to protect themselves and us as well.

since the problem is if they get infected, now their machines may have your email address in their address list.

And then you wonder, why is this person sending me an email?  Well, their machine was compromised and is now sending spam malware to everyone.

And guess what, the badly configured machines will get attacked again and again. 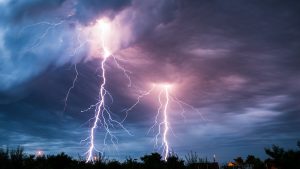 This is not like lightning - Cybersecurity strikes again and again until you fix the processes for good. although there are no guarantees at least you can make the risk minimal.

Contact Us to discuss how to check your IT staff and make sure you will stay in business even after an attack. Or to get your ship in shape before something happens.

I bet you did know you are playing Cybersecurity Russian Roulette? Do you have a 500Barrel Gun or a 1000barrel gun?

How would you find it? Well we have to find out what kind of software you have…  and the vulnerabilities they have.

What can be done? Patch your devices, learn how to perform risk management with all digital devices.

Don’t play Cybersecurity roulette, you can have risk management that can mitigate risks and keep things manageable.

Also posted on my Blog at Oversitesentry

Malware is becoming more sophisticated - and it is difficult if not impossible to catch every virus/malware that is being created constantly. 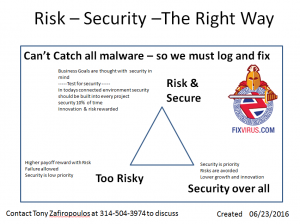 If this is a true statement:  "My IT department will not catch all malware that is being created"  even with anti-virus Next gen firewall and more. Now what?

We have to try to detect the malware as fast as possible after it affects the computer - and then react to it.

But you say - what do you mean - I catch all the viruses and malware...  i have anti-virus and a new firewall that inspects network traffic, I have anti-spam which removes all the known viruses. 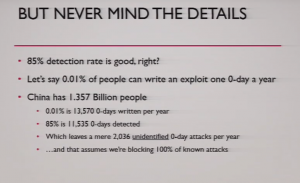 We know China is very interested in Cyber warfare and stealing secrets - making money etc. So in China there are 1.357 Billion people in China(2013) as per Google.

So therefore there will be 13,570 0-days written in a year. So let's say 85% of these 0-days are caught by our defenses because the attack looks similar to a current known virus (which we detect) or otherwise effect.

And now you know why the Attacker has the advantage  - it is hard to keep up with 2000+ new attacks per year - almost 6 per day. 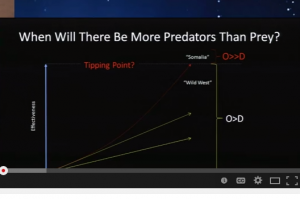 We have our work cut out for us - as every IT function must work just right, this is too important and thus must get audited by a separate entity like us.

Contact Me Tony Zafiropoulos 314-504-3974  to get the conversation started.  To increase your focus on the things that matter - detect and react.

Why? Once the criminal has hacked your computers they can sell the "access" to your devices.

How can I say that?

Kaspersky¹ and others have found a "market" of hacked machines at xDedic.

This means that for $6 a criminal can buy access to some servers in various parts of the world. So with a cheap purchase such as that what could you do with it?

With this purchase one could install Ransomware which may result in $300 - $500  return. 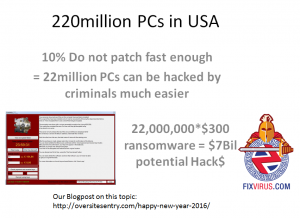 So the criminal does not have to learn how to hack machines, just has to know existence of these criminal marketplaces where for a small fee one can obtain access to servers.

So if your machine received Ransomware and you did not know how it got there - maybe it was installed by a hacker at an odd time and your IT people never saw anything.

• Install a robust security solution as part of a comprehensive, multi-layered approach to IT infrastructure security
• Enforce the use of strong passwords as part of the server authentication process
• Implement a continuous process of patch management
• Undertake a regular security audit of the IT infrastructure
• Consider investing in threat intelligence services which will keep the organization informed of emerging threats and offer an insight into the criminal perspective to help them assess their level of risk.

Notice number 4: "Undertake regular security audit of the IT infrastructure"

It is a good idea to perform security audits since your IT department does a good job, but just has to tighten a few items. Or maybe needs a little help here and there. It is human nature unfortunately not to ask for help when needed. So contact an auditor (like us)

Of course we have discussed all of these points on this site and on our Blog Website Oversitesentry.com

At minimum an Alpha scan will find basic problems and is relatively inexpensive (compared to losing your data).

Old fixvirus.com site We have been here typing away since late 90's.

We have added several companies to the internet back in the day.

Let us help you review your security profile.